"Why I Am a UU Humanist", by Mehl Renner 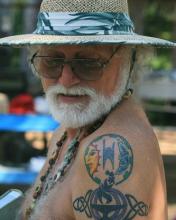 Editor's note: this is an entry in a series of essays on this topic. Please, share your story.

My title likely comes from a bumper sticker and I borrow it because I have such a strong belief in the concept of freedom. That certainly includes the freedom to be an atheist! I am Vietnam veteran and did not serve my country so I would be required to believe in God. We are NOT a country “Under God”, but rather under a constitution that gives us the freedom to believe or not believe as we choose. The best thing to have faith in is yourself!

My mother raised my two sisters and me as a Baptist to expose us properly to being churched in the South. My dad was in the beer business and that was rather frowned upon. He was once the Plant Manager of the Budweiser Brewery in St. Louis. I think he was always a hard core atheist and I later embraced that as well. I believe it began to happen for me when I entered college, because it was then that I really started doing more genuine thinking. In later years my dad and I both loved the thinking of Sam Harris and Richard Dawkins and all the principles of Humanism. We had no regard for most religions, but were both approached to become charter members of a Unitarian Universalist church. Most of the charter members were gay and were turned away by local churches. That was just not right. I liked the idea of seeking truth on your own terms and in my mind constantly redefining by reason my spiritual equation to live by. So about 20 years ago my dad and I became charter members of the Georgia Mountains UU Church located in Dahlonega, GA. We both were featured speakers at services and really tried to convey the need for more of a “habitat of humanism” rather than a “house of worship”. To worship anything is to enslave the mind. 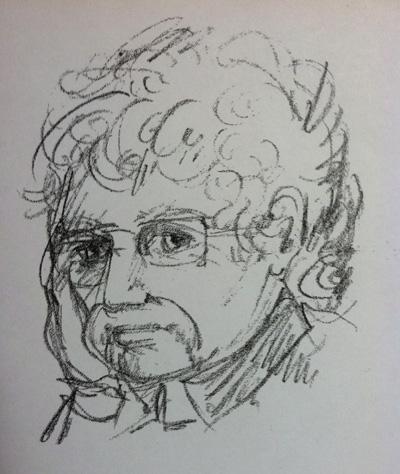 Fourteen years ago I moved to Charlotte and became a member of the Piedmont UU Church. There I met my significant other, Gail, at a church coffee house event. [Editor's note: that's Gail's portrait of Mehl on the right. The one above was taken at the Burning Man Festival.] She is a woman who claims to be a druid, with a similar distaste for fundamental Christian belief. She tends to be more spiritual and that is okay. There is book written by a highly respected French author titled “The Little Book of Atheist Spirituality”. A humanistic perspective is that God is within us and not a super natural power over and above us. In other words, we are God. We need to be far more concerned about our planet in order to be one with the earth. Similar to the message conveyed in the pantheistic message of the movie “Avatar”. I mention the UU church I am a member of here in Charlotte because a couple of years ago I was nominated and became president of this congregation in spite of my well known standing as an atheist. This says a lot about the tolerance of that denomination and demonstrates how members truly have the freedom to seek what is truth for them without being subjected to the traditional dogma for most churches.

I am extremely proud to be a freethinker and free to be an atheist!

Categories:
opinion
Why I am a UU Humanist essay

I can easily relate to Mehl's need for a "community," but I must disagree with his choice...although it might be the "least bad" choice. I'm 67 years old, born into a Catholic family, and have been a UU for over 25 years. Yes, UU's have "tolerance" for atheists. That's not quite the same as a welcome, though. I have been an uneasy member for years now, served on the board, on various committees, served coffee and asked to run for president more than a few times. But the overall feel of the place is that my atheism is a "phase," an aberration and that I am still 'seeking after truth,' etc. Well, no; That's THEIR nonsense! I am a happy atheist, I have no invisible friends, and no need to seek a sacred place. I see "worship" as a transitive verb with no place to land. What's "sacred" about sunday? There is no evidence and no reason to believe any such phantasies. Though I contribute time, effort and pledge money, I cannot espouse my non belief with the frequency, support, finances, bells and whistles, etc., that the rest of the congregation can muster at their disposal. I am the tolerated exception. Perhaps my fellow congregants "tolerate" me ONLY to show how tolerant the UUs can be. And, NO, you are not an atheist if you merely move a "god" from some other place in the universe and place it within yourself, or Gaia, or the nearest crystal, whatever. Either there are or there aren't "invisible friends." Is UU a (still?) a religion? It seems to me that a religion REQUIRES belief in some kind of: spirit, ghost, power, aura, influence, entity, non corporeal non-thing, you know, a "nothing." If words and discourse are to have any relevance, then we can't alter the meaning of religion to encompass atheism. Why, after all, have a "Worship Service," if not to acknowledge some (...thing?) more poweful than ourselves? ...some, call it what you will, "god." For now, I still support "my" congregation because of some of the tangible work they do, and for what I can do in association with them, but I grow increasingly weary of flying against the never ceasing barrage of windy "spirits." Religion once offered myths to "answer" many of our questions. It is woefully inadequate for that now that more and more people know enough to trust science over myth. The day for any religion is long past. I think UUs have the best chance of growing into a Post Religion. Deconstruction "god" to fit the hazy UU (non-)dogma is NOT the way to move beyond myth. Atheists don't need the UUs, the UUs need to embrace atheism.

I find it troubling that you don't feel embraced at your UU congregation. With all that structural freedom, UU social settings can vary greatly depending on the makeup of the community. I like this quote from the UUA page. "...Although [Atheists] are often defined by what they do not believe, the reality is that they do believe in a great many things, including many beliefs affirmed within Unitarian Universalism. They believe, for example, that we as humans are responsible for our own actions, that the here and now is important, and that it is good to try to make this world a better place..."
I also like Mehl's "habit of Humanism," and his tattoo! It's great that he's so involved, and that he can share that interest with a parent. I can't talk to mine about Humanism. We politely avoid the subject these days, although, most importantly, we do share a warm and loving relationship. It appears from the website (uua.org) that the UUA does embrace Atheists, Agnostics, Humanists, and non-theistic UUs in general. UU's are free to find their own personal inspiration, as they are not held by Dogma or Creed - for which I am truly thankful. It's a melting pot of progressives (both theistic and non-theistic) who are searching for deeper meanings, while working to create a more just world.

Ron,
Enjoyed most of your comments and really liked your last sentence. I very much agree that we need to move beyond religion to meaningful philosophies, especially humanism. May I suggest a recent book by Mike Werner titled REGAINING BALANCE: THE EVOLUTION OF THE UUA

Where are my and other comments?

Hi, Ron! I had the website set up to send me anonymous comments to approve before they were posted because of the large amount of spam we were getting. I've installed and configured a spam filter now so I've removed that step and future comments should show up right away.

Enjoyed the comments by both Ron Ventola and Brian L.

P.S. - That was suppose to read "Habitat of Humanism"!

Fixed! Now that makes more sense to me and I really like that phrase. May I use it?

Please do use the phrase and let us hope there will be fewer houses of worship filled with brainwashed congregations!