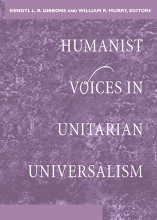 Humanism (with either upper or lower case "h"), whether labelled a philosophy, life stance, worldview, movement or "religion", dates back to the ancient Greece and Rome of Eipicurus and Lucretius.  After lying dormant for centuries it began to reawaken following the Renaissance, the Reformation, the Enlightenment, and the development of science. The Deism of Voltaire and Paine and Jefferson was a sort of proto-humanism. The 19th century growth of democracy, science, public education,  and industry - aided by  Darwin's breakthrough in science - spurred the advances of freethought and rationalism. The Ethical Society movement took off after the Civil War and Unitarian congregations moved leftward theologically toward naturalistic Humanism.

Finally, about 100 years ago some Unitarian ministers and philosophers began using the word "Humanism" to label this movement in religion, culminating in the publication in 1933 of the Humanist Manifesto. Soon after that, Unitarian ministers founded the American Humanist Association, headed for several years by Rev. Edwin Wilson. Years later philosopher Paul Kurtz, the moving force behind the 1973 Humanist Manifesto II, founded the Council for Secular Humanism. By this time a majority of  members of the 1000+ Unitarian Universalist (UU) congregations considered themselves Humanists. Today the largest group of Humanists may be found in UU congregations, while others are in Ethical Societies, Humanistic Jewish congregations, and the two principal Humanist organizations, the Council for Secular Humanism (CSH) and the American Humanist Association (AHA), plus uncountable numbers with no formal affiliation, not to mention the many overseas Humanist organizations in the International Humanist and Ethical Union, founded after World War II.

(Disclosure: I am the author of one of the 24 sections of this book, a signer of Humanist Manifesto II, a friend of Wilson and Kurtz, a columnist in the CSH journal Free Inquiry, a past president of the American Humanist Association, and a long time member of UU congregations.)

Humanist Voices in UUism highlights the great diversity among UUs, among UU Humanists, and among Humanists who are not associated with UU congregations. Of particular importance, the book articulates a Humanism that is positive and affirming and that emphasizes community and social justice.  About half of the authors are UU ministers and half are not. Some Humanists are comfortable with the word "religion" to label their Humanism and some are not. All, I suppose, would agree with my bumpersticker definition of Humanism as a "compassionate ethical naturalism," whether religious or secular.

It should be noted that many UU Humanists have complained that the Humanism that includes about half the members of our congregations, like comic Rodney Dangerfield, often "don't get no respect," from denominational leadership. That needs a fix, as UU Humanism is what largely drove the growth of UUism after World War II.

Further, with the religiously unaffiliated now making up a quarter of the US population and growing, UUism needs Humanism to grow and provide homes for these "nones" and Humanism needs organizations like UU congregations and other groups.

My takeaway from this important book, especially in the wake of the November 2016 electoral disaster, is that Humanists, whether UU or religious or secular, must downplay differences and, working with good people across the religious spectrum, concentrate on dealing with the all too real problems facing our nation and our world (in no particular order): defending our besieged public schools, reproductive choice, civil liberties, voting rights, healthcare advances, religious liberty and church-state separation; coping with the anthropogenic climate change crisis and its concomitants (atmospheric CO2 buildup, environmental degradation, toxic waste accumulation, soil erosion and nutrient loss, biodiversity loss, deforestation,  desertification, sea level rise, and the human overpopulation that fuels climate change.)

Our work is cut out for us.

Edd Doerr was president of the American Humanist Association from 1995 to 2003, serving previously as vice-president and board chair under Isaac Asimov from 1985 to 1991. He has been executive director and then president of Americans for Religious Liberty since 1982.

A former teacher of history and Spanish, he is the author, co-author, editor, or translator of twenty books, mostly on religious liberty and reproductive rights but also including five books of poetry and fiction and Timely and Timeless: The Wisdom of E. Burdette Backus. He joined Burdette Backus's All Souls Unitarian Church in Indianapolis in 1951, is currently a member of River Road Unitarian Church in Bethesda, Maryland, and has been a frequent delegate to Unitarian Universalist Association General Assemblies. An accomplished speaker, he has preached in over a hundred Unitarian Universalist churches in thirty states. He has served on the governing body of the Religious Coalition for Reproductive Choice since 1973 and on the boards of NARAL, the ACLU of Maryland, and the National Committee for Public Education and Religious Liberty. More than 3,000 of his articles, columns, reviews, and letters have been published in The Humanist and many other publications.