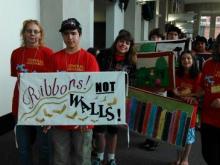 They’ve been hung from the rafters of a 19th Century barn hosting a progressive dinner dance in rural Michigan, paraded by youth for the plenary delegates at General Assembly in Providence, held by parishioners as a “living ribbon” at the close of several UU Sunday services around the country, and have welcomed customers from the walls of a neighborhood Starbucks as part of a local art walk on the south side of Chicago.   As this is written, the twenty six fabric art panels that comprise Ribbons Not Walls, a UU Humanist sponsored project on immigrant rights and culture, grace the walls at the UU Congregation of Las Vegas, for a month long program titled “Borders and Boundaries.”  It is the 50th venue for “Ribbons” since the spring of 2012, and will raise the number of viewers who have directly interacted with the art to over 8,000.

“Ribbons” began as a half dozen yard-wide panels, mostly reflecting themes and cover art from books by Hispanic authors, (see separate article on the “Banned Books” project) taken from Tucson classrooms when the State of Arizona banned “Ethnic Studies” courses.  Then the youth of the Navigator (coed, inclusive) Scouting group from Countryside UU Church in Palatine, IL contributed four batik style panels, reflecting aspects of the immigrant experience.  More contributions from a total of forty artists, working individually and in groups, were added, including depictions of humanist and UU immigration justice projects.

Of particular note are panels by the youngest and the oldest contributors – “The Wall” a rich dark acrylic on muslin rendering by 14 year old Alayana Vesto, and “Banned Books,” human figures bannered with book titles against a traditional quilt pattern, by 94 year old Gloria Weberg.

Two panels by Linda Lee, lead artist for the Lake Apopka Farmworkers Memorial Quilt titled “Scenes from the Muck – labor and leisure” done in traditional primitive piece quilting style, toured as part of our exhibition for a year.  They have now been returned to Linda with our profound thanks - photographs of her pieces remain in the exhibition catalog.  The full farmworker quilt is known for its 128 + depictions of farmworker life, and for appearances throughout southern states at union rallies and social justice gatherings.

The latest additions to the collection are two Commemorative panels for victims of the Los Gatos plane crash, subject of the Woodie Guthrie song “Deportee.”  For decades, activists have worked to uncover the names of the twenty eight braceros who died following their legal work on the California harvest.  Just last year the last identities were uncovered, and a new engraved headstone bearing all twenty eight names, marks the place where they were buried anonymously.  Much of the work was done by author and performance artist Tim Hernandez.  UU Humanists is proud to partner with Tim and others who worked on the 28 Deportees Memorial, by gathering small fabric panels of handprints (a sign of support) and leaves (from Guthrie’s line “Who are these Friends, all scattered like dry leaves?”) made by UU and Humanists children and adults around the country.   These are being stitched into panels, each one bearing one of the names.

Ribbons Not Walls is an artistic response to a highly complex political issue.  In the finest humanist tradition, we use the emotional and intellectual impact of the artist’s vision, to ask audiences to engage the culture and the struggles of immigrant communities and individuals.  We do not ask you to take a particular stand (though several of the individual artists clearly do), but simply to be open to letting the works speak to you.

The growing “Ribbons” collection will go from Nevada to Florida for at least two winter appearances, and then back north in March to be displayed at the Ohio Meadville/St. Lawrence District Meeting in Niagara Falls, NY, and then at the MidAmerica Regional Meeting in Naperville, IL.  You can also see the collection at the UU Humanists booth at the UUA General Assembly in Portland, next June.

If none of these venues are on your itinerary, perhaps you’d like to bring the Ribbons exhibit to your congregation or Humanist group.   Contact curator Roger Brewin at Rabrewin@aol.com or call him at 773 881 4028, or cell 773 551 8540 to make arrangements.