I've been "running" the HUU booth at General Assembly, with an able assist from Jack Reich and each year, a rotating cast of enthusiastic others, since 2002.  I take some pride in the fact that we are usually among the largest and most energetic displays in the exhibit hall.  I take pride in the fact that we share our space with other humanist and social justice organizations - this year the Channing-Murray Campus Ministry, the Humanist Institute, Secular Student Alliance, and a Gun Control group called "Change the Conversation," were all on board. 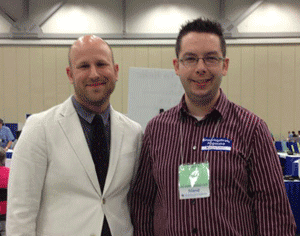 To me, our prominence among exhibitors reflects some of the best of UU humanism:  the fact that we believe enough in our values and programs to promote them with vigor; the fact that we are reminding our fellow religionists, gently, that UUism runs on humanist values, from the language of the Purposes and Principles, to the emphasis on individual conscience in religious matters, that is at the heart of many UU congregations, to our Association wide penchant for social justice action.  The  connections with other groups also speaks to me: the Humanist Institute is not only a major part of training the next generation of humanist leaders, it is also an incubator for educational materials for all those call humanism home; both the Secular Students and UU campus ministries are at the forefront of creating humanist communities for a new generation. 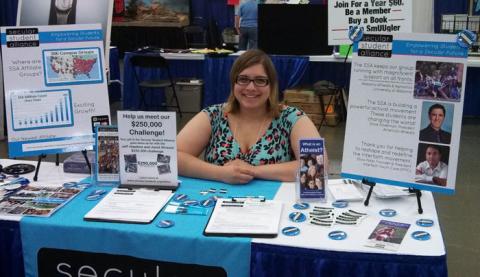 Jessica Kirsner of Secular Student Alliance
Two years ago the HUUmanists board began cautiously endorsing social justice projects, in response to the call for a Justice GA.  The focus on censorship in the Arizona Banned Books project appealed to a broad humanist consensus - even though it was clear that our national membership held divergent views on the policies in question.  The focus on literature and the right to read, and the creating of alternative libraries based on the infamous eighty Tucson volumes, in Phoenix, in El Paso and in Louisville, created a common front. The invitation issued to fabric artists, to add their vision with the "Ribbon" project, an effort in which emotion lead reason to some extent, was also adopted only after considerable reflection.  We didn't want to simply slap the organization's approval on something, and then regret it later.

So when Janet Fisk (backed by a UU social justice staffer) asked this past spring if our June 2012 booth could host her "Changing the Conversation" program on Gun Control, I didn't know if we would have enough time for the kind of careful deliberation we had previously given such decisions.  I needn't have worried: Janet's reasoned approach of aiming to involve gun rights as well as gun control advocates in the same broad ranging conversation, and her use of the arts (she is a documentary film maker) an area of social action with which we had become familiar, was a combination that carried the day.  Sensing the social urgncy of the issue, and the need for a variety of activist approaches under our HUU rubric of "reason and compassion," our board said: "if there is any other issue we should be adding to our agenda this year, this is it." 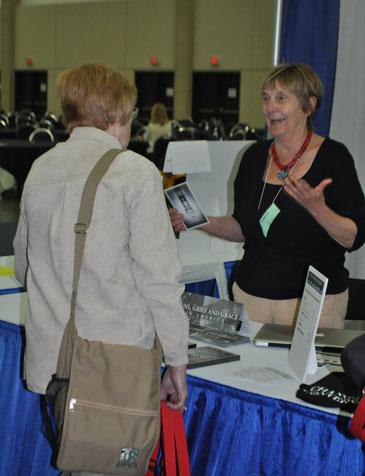 Janet's films and fliers joined a booth already adorned with the two dozen "Ribbons Not Walls" art pieces, and 160 copies (two full sets) of the Banned Books, headed to the library of the Americana Center, which serves 17 immigrant groups in Louisville.

Arguably, the biggest, baddest thing at the booth this year was the sizable contingent of HUU Board members and regional volunteers who helped staff it.  They engaged folks who came by (I estimate about 2,500 of the 3,500 or so GA attendees visited our location) answered questions, handed out literature, sold books, stickers, pins, memberships and sponsorships for our social justice programs. Others have done the same in years  past, but in much smaller numbers.  Combined with our increasingly productive board meetings, livelier web presence and growing publication and social justice profile, this years HUU booth effort gives me great hope.