At the 2013 UUA General Assembly in Louisville, KY last June, the HUUmanists held our annual business meeting. At that meeting we had the pleasure of awarding the first ever Religious Humanist of the Year Award to our distinguished board member, the Rev. Roger A. Brewin. In his introduction to the award presentation, president John Hooper listed these accomplishments that made Roger the obvious choice for this honor:

"In summary," John concluded, "we give this award to Roger Brewin for his extraordinary service to Humanism and Unitarian Universalism." 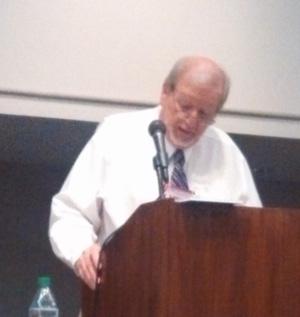 Thank you John, for the kind introduction; thank you to the Board of HUUmanists for the recognition; thanks to all of you who have come or stayed around to see this presentation.

I believe I received this award because I am an old fashioned kind of humanist - to be precise, an old fashioned Midwestern kind of humanist, in the mold of those proto-humanists who populated the Free Religious Association, the Western Conference of Unitarians and the Iowa Sisterhood.  I feel, as many of those pioneers did, that humanism is less about what you believe (or don't believe) and more about what you DO.

To put things in the correct priority - humanism, particularly Religious Humanism, is mostly about what you find you must DO, in response to what you happen to believe.

I'm a humanist in part because I was raised that way - and that upbringing lead me in my forty years of ministry, to call repeatedly, for the application of science, logic and common sense in every aspect of life.  But I'm also a religious humanist because those calls must always be balanced and enhanced by compassion.

I'm a religious humanist because throughout my education and career, I pursued a strong interest in the religious and ethical views of my fellow human beings, in particular what actions they took as a result of what they believed.  It's not what we think or believe that makes us moral, it's what we DO.

I'm a humanist in part because I've been over the years, a social activist - for peace, for free speech, for reproductive rights and most recently for immigration reform.  I feel that humanists should not simply hold convictions about such matters, they should act to better the human condition.  It's what we DO that changes things, not what we believe.

I'm a religious humanist because religion, especially liberal religion, and most especially Unitarian Universalism says to us - if you believe strongly in something - you must help to bring it to fruition.  There are no other moral agents, besides us.

Finally I'm a religious humanist because one of the ethical demands of religion is the obligation to get others, as well as ourselves, to commit to something bigger than ourselves,

Family:  Katherine, my wife of forty four years, and my friend since the seventh grade, is here tonight, having driven 320 miles today, to see me give this brief speech,  Since she is still a couple of weeks from retirement, , she will have to drive back to Chicago tomorrow, 320 miles the other way, in order to be at work on Monday morning.  We have done this sort of thing for one another, and one another's families, for a long time.  Of such commitment to doing well for one another, is family built.

Friendship:  My friend Jack Reich, has been at eleven straight General Assembly booths with me for the humanists.  We have pursued, over many more years, quite a few adventures  -  not just as reflections of our being humanist, but in the deliberate DOING of what humanism demands. Many of those adventures have been initiated by Jack's favorite phrase "Say, I have an idea ..."  Together we have done the hard work of moving past disagreement, and turned a number of them into action - deepening our friendship as we did so,

Community:  to receive this award at General Assembly is particularly gratifying, since I have seen this week, and received congratulations from, so many colleagues and members of congregations I have served.  This is the epitome of community for me - a gathering of the newly excited, the constantly re-inspired, and the deeply committed.

Cause:  To receive recognition from the UU humanists is a delight.  This is a group that has moved steadily from solid intellectual underpinnings, towards a growing commitment that takes on the great social needs of our society, indeed of the human race.  HUUmanists are, more than ever, a source of compassionate living, service to others, and dedication to the cause that call us, not just to do SOMETHING, but to do WHAT IT TAKES, so that, in the words of the UU  hymnal, "Earth shall be fair, it's people glad and wise."